My name is Jaxon and I’m the youngest of the Real People competition winners.

When Castle Mall asked me to attend their Kastle Kids Day at the Zoo event I was very excited because ‘Dear Zoo’ is one of my favourite books. ? ? ? ? ? ? ?

When we arrived there was a queue and a bit of a wait, but luckily it moved quickly and even though I’m only 2 I don’t mind waiting.

There were lots of friendly ladies who are part of the Kastle Kids team, they made sure I had a good time and everything ran smoothly.

As we came into the room it was full of colourful animal themed decorations and there were lots of table with colouring pictures of animals.  I chose one to colour but I couldn’t reach the table so I sat on the floor and coloured it in.  A lady gave me a balloon and a Kastle Kids bag with a craft inside but I took that home to make as there was so much going on I found it hard to concentrate on making it.  The craft was making an animal pen pot and animal mask to wear. 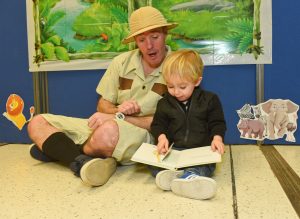 Next was story time, the bit I was most excited about.   I sat with Mummy and listened to ‘Dear Zoo’ the story was told by a Zoo Keeper who was very good and kept all of us interested in the tale!  All the Kastle Kids events are themed around stories, as Norwich is known as the city of stories.  This one featured both Dear Zoo by Rod Campbell and Good Night Gorilla by Peggy Rathermann.

Another lady asked if I would like my face painted, I had a little look but as I’ve never had it done before I decided to leave it to the bigger children.   They were having their faces painted as their favourite animals.

The Kastle Kids photographer wanted to take my picture with the storyteller reading to me but I decided I wanted to take a turn at reading, so read it to him instead!

There were some games to play and fun animal picture where you could put your face in a hole to become the animals, which I really enjoyed. 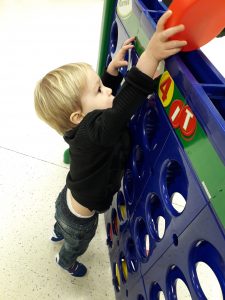 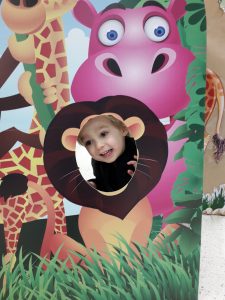 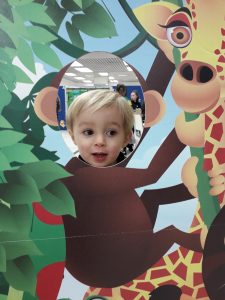 I have suggested to the staff that to make the sessions more enjoyable for me, at my young age, maybe it would be good to have some board games or puzzles to play with as I find it hard to do the crafts with lots of people about and maybe some songs or music.   They said they will see what they can do.

I had a great time at the event and excited to find out what they have planned next.