The most anticipated film of the year arrived this week at our Vue cinema.

Warning; there may be slight spoilers ahead!

Spiderman: No Way Home sets off a week after the events of the previous film. Mysterio has revealed Spiderman’s identity as Peter Parker and claimed to be murdered by him. Peter struggles to cope with the angry crowds and commenters. However, when Peter, Ned, and MJ are rejected from MIT university because of their links to spiderman, Peter decides to seek Doctor Strange’s help to cast a spell to fix it. The spell doesn’t quite go to plan and breaks open the multiverse and allows villains from alternative realities to enter.

Spiderman: No Way Home is hands down the best film in the Spiderman franchise and brilliantly sets up Marvel’s Phase 4. It has a perfect balance of action, emotion, comedy, and a beautifully scored soundtrack. The atmosphere while watching this film at the cinema was incredible, people cheered and cried.

We won’t spoil anymore, you’ll have to watch it to see what the multiverse brings! 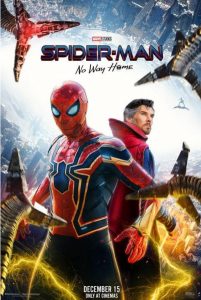